COHHIO produced this video in conjunction with WOSU on the 25th year anniversary of the Ohio Housing Trust Fund.

Thanks to the Gund Foundation and the Ohio Housing Finance Agency for their generous support for this project. 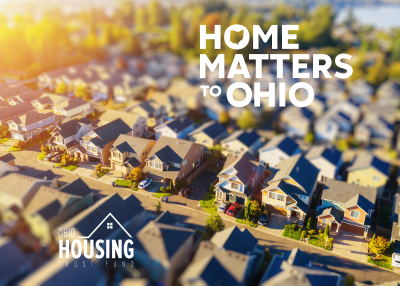 Housing is by far the most expensive item in the family budget and is simply out of reach for too many Ohioans. The Ohio Housing Trust Fund is the primary source of state funding for local homelessness and housing services that helps vulnerable Ohioans keep a roof over their heads. The OHTF typically provides approximately $50 million each year to support for housing activities including: home repair and accessibility modifications for low-income homeowners, rental housing development, homeless shelters and supportive housing operations throughout Ohio’s 88 counties.

History: After voters approved the constitutional amendment on Ohio Housing Assistance in 1990 (Article VIII, Section 16), the General Assembly was required to pass implementing legislation, which created the Ohio Housing Trust Fund with broad bipartisan support. During the early years, various funding sources were used while working to identify a permanent source of funding for the OHTF. Three separate study committees convened by Governor Voinovich, Governor Taft, and the legislature itself all issued the same primary recommendation: create a Housing Trust Fund Fee that mirrors the county recorder fee. In other words, fee revenue collected by recorders should be divided 50-50 between counties and the Housing Trust Fund. That proposal garnered consensus and was finally adopted through legislation with strong bipartisan support.

Current Law: State statute targets Trust Fund resources toward Ohio’s neediest populations: at least 75% of the funds must help people at or below 50% of area median income with a preference for those below 35% of the area median income. State law also requires at least half of OHTF funding be awarded to rural areas.

A broad range of organizations can apply for OHTF resources, including nonprofits and private businesses. OHTF dollars are administered by the Ohio Department of Development (ODOD) and allocated based on recommendations by a seven-member advisory committee representing various real estate, lending, housing, and local government sectors.

Funding Source: The Housing Trust Fund Fee revenue, which is 50% of recording fees collected, fluctuates from year-to-year based on the housing market. Annual OHTF fee collections have ranged from a high of $73 million in fiscal year 2005 to $43 million in FY 2019. The fiscal year 2022-2023 biennial budget set the appropriation authority for the OHTF at $55.5 million a year. However, actual spending amounts cannot exceed revenues, which have not reached $55.5 million since FY 2007.

Human Impact: Local agencies use these dollars to create housing opportunities that greatly improve the lives of Ohioans living in precarious and unhealthy circumstances. In the most recent fiscal year, the OHTF funded local efforts to:

Economic Impact: The OHTF has a positive impact on Ohio’s economy. The $45 million allocated during the most recent year leveraged $144 million from banks and other private financing, local governments, and federal sources. In total, each dollar allocated generated $8.30 in economic activity for Ohio based on analysis by OHFA.

Housing Need: Ohio had a serious and growing affordable housing shortage for years. Even before the pandemic-induced recession, there were only 42 rental units that were affordable for every 100 extremely low-income households, and nearly 400,000 Ohio households spent over half their income on rent.

Outlook: The OHTF is really the state’s only stable and consistent source of funding to create housing access to the lowest income Ohioans living in rural, suburban, and urban areas throughout the state. County recorders’ shift to digital and online document recording systems creates uncertainty for future OHTF revenues. Providing greater stability for funding the OHTF will reduce housing instability for vulnerable Ohioans – homeless families, women at risk of infant mortality, people with disabilities, and seniors who want to remain in their own homes.

Jan. 6, 2023Amy Riegel, executive director of the Coalition on Homelessness and Housing in Ohio, issued the following statement in response to Gov. DeWine signing HB 45 without vetoing several [...]

Updated June 2022 Legislation currently pending in the Ohio House Finance Committee has the potential to expand the Ohio Housing Trust Fund, the primary source of state funding for homelessness [...]